Recently, my colleague at the thedataist.com published a compelling post about some challenges in machine learning education. You can read it for yourself here, but I’d like to build upon what he posted; it’s bothered me for a long time that the math behind common machine learning algorithms like regression are clouded in confusing mathematical notation.

At its core, machine learning is math. I’m certainly not calling for a complete decoupling of machine learning applications from math. But we as a tech community can probably do a better of mentoring others and helping them understand what’s going on under the hood when they’re applying common machine learning algorithms like linear regression in software packages like scikit-learn.

I’ll attempt to demystify the very useful linear regression method in layman’s terms and Python here. I’ll start by trying to use plain English and intuition, and then going to Python (Pandas and Numpy) to do the heavy data and math lifting. Lastly, I’ll use scikit-learn to show we get the same results using that package.

dependent variable: the variable we’re trying to predict; the variable which depends on some other variable(s). Also known as the target variable or simply, “y“.

parameter: the amount(s) by which our method increases or reduces the prediction of the dependent variable. Also known as “theta(s)“, “weight(s)“, and “beta(s)“.

model: the entire representation (mathematical or otherwise) of the relationship between the variables, including the parameters

A common approach to solve linear regression (to estimate the best parameters of X) is called Ordinary Least Squares (OLS). It’s called that (somewhat awkwardly) because we use it to find the parameter or weight of X that is associated with the least amount of error squared. We use error squared because we’re interested in the distance of our line below from the actual y, and not so much whether it was above or below the line. Also, squaring produces some nice properties that are useful later.

Graphically, this means that if could draw an infinite amount of lines through the dots below, and for each line, sum up all the errors for each line and keep track of them all, the slope of the line which has the least amount of total error associated with it would be the parameter we’re looking for.

This is where things get a little mathy.

Luckily, we don’t have to draw an infinite number of lines and sum up all the error squared to find the slope with the least amount of error. We can solve this problem analytically. We start by identifying an objective function and then use  linear algebra and matrix/vector calculus to do the minimize the function (stay with me!). We’re looking to minimize squared error in our model, so let’s say our objective function is:

Remember that when we subtract a vector from a vector, we end up with a vector. So (y – some_weight * x) is a vector. In order to square that vector, we have to transpose one of the vector terms:

If we were doing this by hand, we would continue to expand this expression and and set the first derivative (or gradient) of the resulting expression with respect to the unknown parameter (the vector of weights) to zero to solve for it. It turns out that when you do this, you end up with this expression for the parameter estimate.

We start by importing Numpy, Pandas and the Boston housing data set and linear_model from scikit-learn.

Next we build a full dataframe from all of the Boston housing data. In the Boston data, the price is the target or dependent variable, and the rest are independent or explanatory variables.

We’re interested in the relationship between rooms and the price so we plot to see what it looks like graphically: 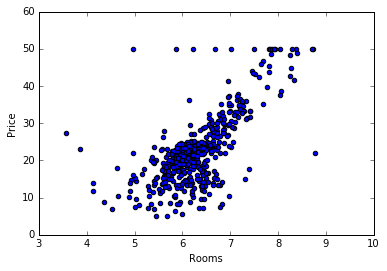 There’s a few funky-looking things going on with the graph, but there’s generally an upward behavior in price (y) as the number of rooms (x) increases. So we can expect for the parameter associated with the X variable to be positive. We also expect to have a vector of weights with only a single value: the parameter associated with number of rooms.

Now we jump right into the math again, but using Python to do the heavy lifting. We’re going to turn the Boston rooms data to Numpy matrix form, starting specifically with column vectors as if we were looking at spreadsheet columns. The rooms data  will be our X. We do the same with the target variable, the house price. This will be our Y:

Now all we have to do is make sure we can invert XT X by checking if the determinant is equal to zero.

Since our matrix was invertible, we can proceed to evaluate the rest of our expression to estimate the unknown parameter (following one convention by calling it w-hat):

We end up with a single parameter for X because we were only estimating a single relationship:

This suggests the target variable increases by 3.65 for every unit increase in the number of rooms. This also validates our graphical intuition that the room number has a positive effect on price.

What happens when we use scikit-learn’s linear regression package?

We declare a model LinearRegression from linear_model and set it to not include an intercept (by default, the package pads the data with a vector of ones) so we can correctly compare our estimate here to our estimate from above.

This throws an error however, since we’re only using one feature (number of rooms):

So let’s follow the tip and reshape our X data:

Now we can produce the parameter estimate:

As you can see, the more manual Numpy process and the more “black-box” scikit-learn process both produced same exact parameter estimate!

Now go forth, research, and predict.

Here’s a notebook with all the code.